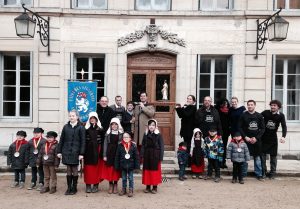 As every year, the village was celebrating on January 22nd, 2015: the statue of Saint-Vincent, patron saint of winegrowers, changed homes to go to the Domaine du Comte Liger-Belair.
This beautiful day began with the Mass celebrated by Father Louis de Raynal and Father Gusti Hervé in the Church of Vosne, full for the occasion. And at the end of the celebration, all the winemakers and employees of the wineries were blessed.
Children of the village also took part in this beautiful celebration by marching in layots and layottes (traditional Burgundian headdress) through the streets of Vosne-Romanée grouped around our patron saint.
After Mass, more than 300 people were welcomed in the orangery and winery of Château de Vosne-Romanée for an aperitif before meeting up in the village hall for the traditional Saint Vincent banquet where a gourmet menu awaited them, accompanied by wines brought by each Domaine!

Newer
We want to use cookies to make statistics on visits to our site. Do you agree?I agreeI desagreeCookie management
Cookies